The other morning I received an email from a federal contract specialist asking my opinion about whether open-source software is a commercial item subject to the Federal Acquisition Regulation’s (FAR) Part 12 commercial item procedures. The question is a great one with important implications: an affirmation would require planning, market research, competition and, ultimately, an attempt to place a fair market value on software that in some cases may be freely used and modified without cost by members of the public.

The contrarian in me said no, despite an awareness that I was probably wrong. While there is no arguing that open-source software is “customarily used by the general public…for purposes other than governmental purposes,” I questioned how open-source software could be “sold, leased, or licensed to the general public” when I’ve always understood it to be free and not proprietary. 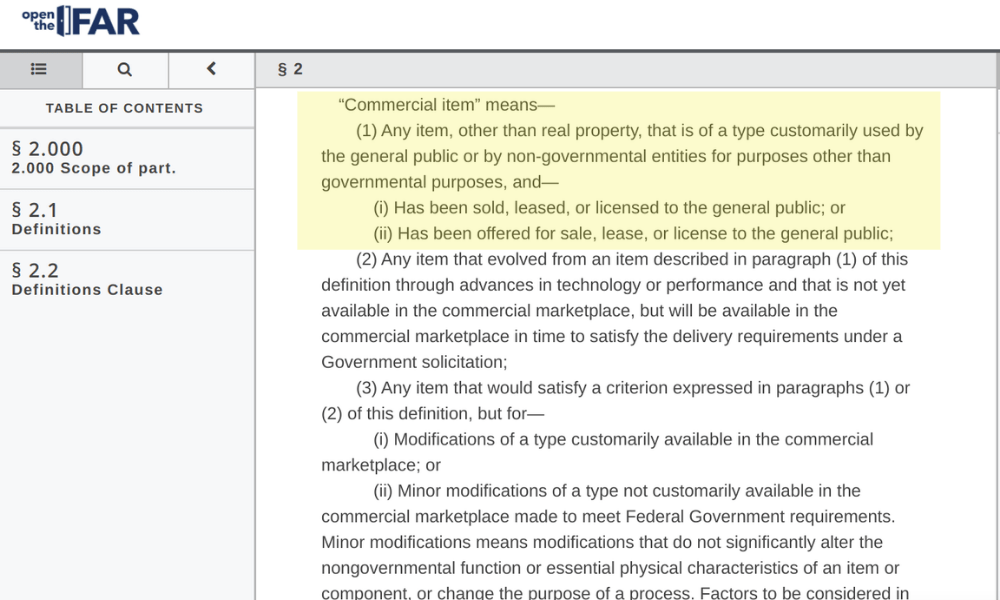 I know the FAR, so I knew the “or” in the quoted text above (which comes from the FAR’s section 2.101 definition of commercial item) to be the imperative term; in order to prove that open-source software is not a commercial item, I would have to prove that it is never sold, leased, or licensed. If none of the three adjectives in that serial list were met, I’d have a decent chance at proving the point.

I thought in principle that open-source software was and always will be free, and something that is free may not be leased, so I focused my attention on whether licenses issued by those in the open-source community would meet the legal definition of a license. I’m not a lawyer, but I’ve sat through enough contracting classes to know that Black’s Law Dictionary is the place lawyers go when they need a legal definition. Here’s how Black’s defines a license (this is the relevant excerpt; for the full definition follow this link):

“A permission, accorded by a competent authority, conferring the right to do some act which without such authorization would be illegal, or would be a trespass or a tort.”

Okay. So if an open-source foundation or representative body grants permission to use their open-source software (there are several different kinds of open-source licenses, as this helpful site explains), are they considered a competent authority? In order to issue a legally binding license, they would need to have recourse to prosecute violations of that permission. In simpler words, the licensor would have to be able to take a violator to court. My next task was to determine whether this recourse exists and as I would shortly learn, it does.

I should pause here and mention that I asked those in my Twitter network to weigh in on this question, and I’m sure glad I did. What might have taken the better part of a day to research and analyze was resolved by the afternoon as smart folks with an interest shared resources and facts that helped me learn in my moment of need.

Back to the question at hand, which is whether open-source licensors have recourse against those that violate their terms. My friend who posed the original question shared clear evidence of recourse with a link to the GNU operating system (GNU is sponsored by the Free Software Foundation, learn all about it here). An explanation on this page describes how its copyrights are legally binding contracts because the copyright license holders “are empowered to act against violations.”

For good measure, I searched for and found two more examples (here and here) where open-source license violations have been tried in court, and there is even an advocacy group (the Software Freedom Conservancy) that serves as kind of a vigilante to ensure compliance with open-source licenses. Never doubt the passion of the open-source community!

With this evidence in hand, my entire opposition (and the enjoyable role of playing devil’s advocate) evaporated; a valid license behind open-source software meets the FAR’s definition of a commercial item. It looks like my pal in government will have to use Part 12 procedures to procure the open-source software he seeks, for better or for worse. Here’s a few tips he might want to follow, from Government Computing News.

There are a few more wrinkles to this story, like what does a contracting officer do if he or she wants to use free open-source software rather than a vendor’s value-added version of that open-source software? But I’ll save those for another day. My main takeaway from this exercise, and what motivated me to share the experience, is there are smart people out there who love to share knowledge; you just have to be brave enough to ask and comfortable with being wrong.