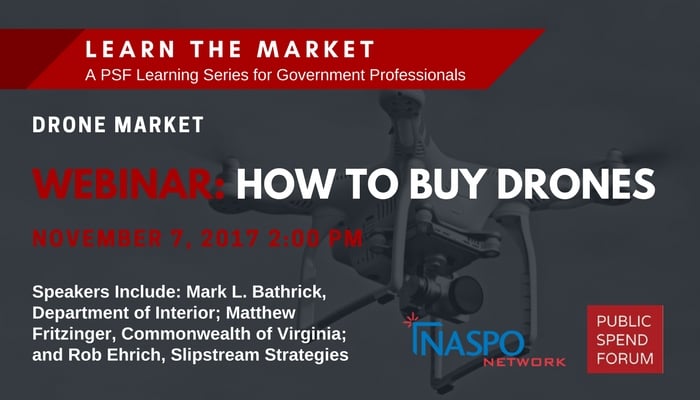 Drones! And How to Buy Them

Here’s one advantage the public sector has over the machines: drones can’t do our jobs until we figure out how to procure them.
So at the risk of accelerating a dystopian state, we’re hosting a webinar on how to buy drones. Why? Because let’s face it, there are things that drones can do that their human operators can’t do, won’t do, or can’t do as safely or efficiently. Like climbing a cell tower to inspect a fuse box, or assessing the underside of a suspension bridge, or rappelling into a sinkhole to inspect its structural efficacy.
No thanks.
Drones are moving rapidly out of the hobbyist realm and into the commercial domain. Insurance agencies deploy them widely in assessing policyholder claims. Filmmakers use them for aerial photography, and oil & gas magnates can survey miles of pipeline to identify possible problem areas. And now government organizations are starting to get into the mix.
We’ve already seen drones used in disaster relief during a particularly bad hurricane season, for search and rescue missions in emergent situations, and to help fight wildfires while assessing the damage left behind. The use cases will continue to expand and evolve, so its important buyers and programs in the public sector to consider how drones can save time, money, and resources while delivering better outcomes.
There’s been a lot of startup activity in the drone market over the last 5 years as the regulatory environment has continued to loosen. Now anyone with a Part 107 license (which has become even easier to obtain) can put a drone up in the air and collect data. So what do public sector organizations need to know before they incorporate drones into their program objectives?
We’ve assembled a panel of experts to discuss these questions as we work to promote activity in this emerging marketplace.
During the hour-long session, we’ll introduce you to the market, discuss specific public sector use cases, and share best practices for acquiring drones. We’ll hear from a state procurement official who is on the cusp of releasing a nationwide contract that will make it easy for governments at all levels to buy drone services. And we’ll hear from a government affairs specialist for a glimpse at how the regulatory framework will evolve in the coming years.
If you’re interested in this topic or believe drones could work for you (or instead of you), you won’t want to miss this webinar. Registration is free as always, and we look forward to seeing you on Tuesday, Nov. 7 at 2 pm for this insightful session! If you have a question you’d like us to address, feel free to post it over at our open discussion thread on how to buy drones.
#All Government Levels
#Market Intelligence
#Learning
#Government Resources
#Learn the Market