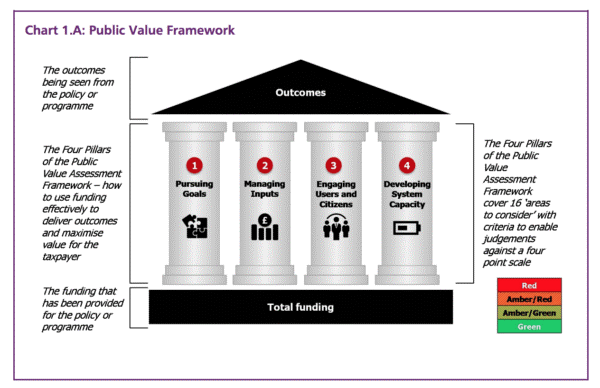 What should be an important report for government was issued this month in the UK. We say “should be” because the initial reaction to it was muted, to say the least – but more on that later.

The report (which we mentioned here briefly) comes from Sir Michael Barber, a distinguished academic, writer, and adviser, perhaps best known for leading the Prime Minister’s Delivery Unit (PMDU) back in the Tony Blair era. The PMDU was a small but powerful group of very smart generally young people who succeeded to an impressive degree in focusing the government on some key outcome targets back around the Millennium. The new report is titled, “Delivering better outcomes for citizens: practical steps for unlocking public value”.

Barber has written extensively about good government policy making and delivery, but it is clear from this report that he is a political “insider”, not a radical or disrupter by nature. One immediate criticism of the report is that it is painfully careful not to say anything that might offend the government (or anyone really). For instance, when he talks about the Greene review of 2010 in our own (procurement) field, he says “The review concluded that the government often failed to leverage its reputation, brand, and credit rating when engaging in commercial transactions”. He does not mention that it was shown to have used inaccurate data and is considered by most procurement people in government to have been a waste of time and energy.

That is a minor point really, but that uncritical nature of the report does grate at times. Another example – he talks about the Single Departmental Plans without mentioning NAO’s verdict on them (which was not very positive) or the absence of any tangible benefits arising from that initiative.

However, there is much to admire in this report too. It is good to see a section headed “what can we learn from the academic community?” Recent governments have not apparently paid much attention to that community, and probably should. Barber also quotes good practice examples of public value creation such as Mitch Daniels in the US  and he is a fan of Mark Moore, a professor at the Harvard Kennedy School of Government, perhaps best known for defining ‘public value’ in his 1995 book Creating Public Value.

The centrepiece of the report is a proposed “Public Value Framework” (see picture). The overall task, Barber says, is clear – to turn “total (public sector) funding into outcomes that citizens want”.  Progress would then be measured via four pillars – pursuing goals, managing inputs, engaging users and citizens and developing system capacity. He proposes measuring those for each government department on a Red / Amber / Green scale. Each of those four pillars is then broken down further.

We need to consider the report more carefully to see if it has any more specific implications for procurement. Generally, third party spend is part of wider programmes which aim to achieve outcomes and social value, although in some cases “procurement” can be a vitally important element. Indeed, thinking about major procurement spend areas does suggest some difficulties with this approach too – what are the “outcomes” from buying a new aircraft carrier, and (assuming the answer is “less chance of being invaded by another country”), how exactly do you measure that outcome in relation to the billions spent on the ship?

In any case, this is an interesting approach – but we suspect little may really happen in terms of this work. According to Civil Service World, Treasury has said there will be “pilots” next year but there is no detail on that. The initial press release said that the Chancellor would talk about the report and next steps in the Budget statement last week – he didn’t. And this might go into the “too difficult” or perhaps “too theoretical” bucket, particularly given that Brexit is occupying everybody’s minds at present.

The cynics might also wonder whether some politicians really care about “public value” anyway. It sometimes feel that it is primarily (or only) “political value” that they care about. Analysing initiatives in this manner might draw unwelcome attention to those decisions and actions that were more about the headlines and the public perception rather than real achievements and outcomes.