How to Calculate FTE Work Hours in a Year

Not all government contracting work is able to be initially measured by the number of products a company will supply — for those offering services to the government, it becomes a bit more sticky. Because the contract must be drawn up before the work is actually done, the contracting official must make a decision about how many hours they will expect the people within the contracted company to work.

To make life easier for you — because we know that calculating work hours is never easy — we’ll go over:

Important in this process is Full Time Equivalent (FTE), which is the number of full-time employees — and by extension, their hours — a company has per week. To calculate how many FTE a company can contribute, you would use a ratio of the total number of hours during a period by the number of working hours in that period, Monday through Friday. When you get a number through this calculation, each FTE is equivalent to one person working full-time (40 hours per week). Having the number of FTEs in mind when calculating person years can make it easier figure out how high or low to go, as well as giving the employer more of a concrete idea of what the contract requires of them in terms of employee numbers.

If FTE is, for all intents and purposes, a calculation of people, and their hours, a company can be expected to contribute per week, person years are a measure of how many hours a company is expected to contribute per year. Because contracts are usually for years at a time, this is an especially important measurement — you don’t want to drive a company to overwork their employees or withdraw benefits from them, but you also want to get the most productivity possible out of a company throughout their contracted time. So what is the best calculation of hours for a person year?

The reason that this is so difficult to calculate is that there are so many variables — most companies give their employees time off for vacations, holidays, sick leave, emergencies, jury duty, company-specific training time, reserve duty, short-term disability, and even pregnancy, most of which cannot be foreseen by a contracting official. Not only that, but not only subtractions can be made — additions can be made as well, for working overtime, or on the sixth or seventh day of the week. It should be noted that, as stated in the FAR, no contractor or subcontractor employing laborers or mechanics can require them to work over 40 hours per week without paying them at least 1 and ½ times the basic pay rate for every hour worked overtime — so in that case, employers may be reluctant to give their employees overtime work. It is a fact of life that humans are unpredictable, but unfortunately, contracting officials get saddled with predicting their actions in order to draw up a reasonable contract.

Let’s start with the basics — 2080 hours in a person year is equivalent to one person, working 40 hours a week for 52 weeks in a year. To be even more accurate, perhaps even to an annoying degree, 2087 hours would take into account leap years. While ideal, this is, of course, unrealistic because it doesn’t take into account any of the time off that employees will expect to receive throughout the year. 2000 is a bit more reasonable, taking into account the 10 national holidays, but it still leaves no room for vacations, or sick, emergency, and pregnancy leave. 1920 would be even better, as it leaves room for not only two weeks leave for holidays, but also 2 weeks to fulfill any other needs for time off. Something even lower, like 1860, could also be used to take into account more of the variables listed above. One survey suggested that most service industries, even outside of government contract work, required employees to bill at least 31 hours per week, which would whittle the figure of person hours per year down to 1612 — which does not include holidays or vacations. With holidays and vacations included, this figure would become 1519.

How many hours should be in a person year?

You now have some options listed above, but which is the right one? To make a long story short, there is no single correct answer. The last couple options seem like they can be ruled out right away as entirely too low, and the first couple seems entirely too high — and that instinct may not be wrong, but ultimately, the decision depends on the specific contract and specific employer.

It should be noted that contractors don’t necessarily have to meet whatever hour requirement you choose by working all employees for a consistent amount of time — they can adjust their employee’s hours up and down depending on the need to meet that requirement. At the same time, as mentioned earlier, some contractors will be reluctant to work their employees overtime since they would have to pay them more, so this could lead to subtraction of other benefits, such as holidays, vacation time, or sick leave.

If the staff of the contracted company happens to be very small, it would not be in the interest of efficiency to require another person to be hired just in case one of the employees takes an extended sick leave or gets pregnant, so the contracted company might choose not to factor in this loss of productivity. In a larger workforce, statistics may give you some idea of how many employees will be missing a certain amount of productive time because of one of the less predictable factors, like emergencies or jury duty. Despite this slight level of predictability, the statistics would also have to factor in the demographics of the workforce — are they young or old? Are they male or female?

Ultimately, the company knows their staff better than a government contracting official ever will, so they should play a role in the calculation of person years. If what is required can be communicated in the form of FTEs, then it can be left up to the company how many people need to be hired in order to fulfill the government’s requirements. The point is to keep open communication with your contracted company because they will know what will happen on the ground much better than you.

In an ideal world, there would be a perfect, beautiful number that could equate to a person year for contracting service companies. Unfortunately, though, the world we inhabit is far from ideal, and so we must deal with the tangled complexities of the process of human living. There is no correct number for person year — the best you can do is keep your channel of communication open with the company, consider all possible factors, and combine all your knowledge and expertise of workplaces to come up with an estimate that might — just might — work for the contract. For a problem with such high stakes, it is not a very satisfying answer, but it ultimately reflects the real world. 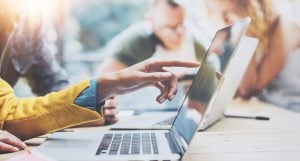