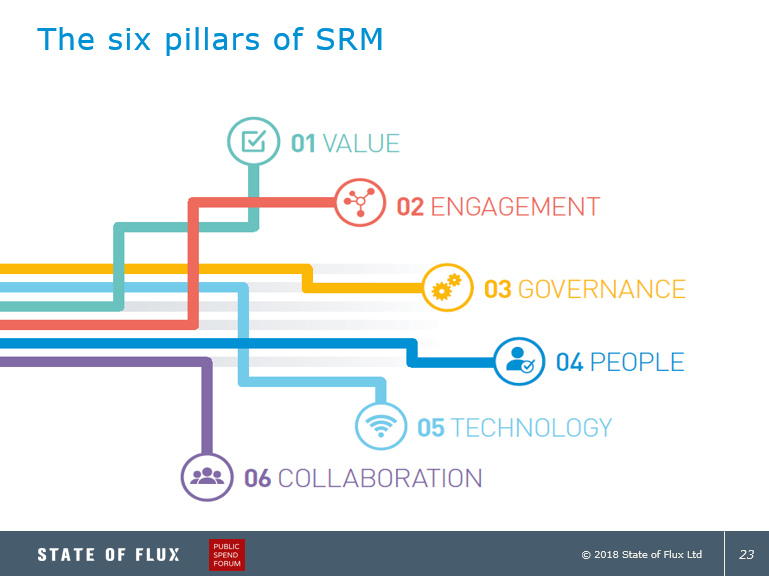 In a recent PSF webinar, Creating Public Sector Value Through Supplier Relationship Management, the UK Cabinet Office and supplier relationship management experts State of Flux have been highlighting some of the issues occurring in the UK public sector and looking at how the UK government is managing its strategic suppliers.

The demise of Carillion at the start of the year just goes to show how important supplier relationship management has become, and should be, in government. Today, governments everywhere deal with, and have become dependent on, some very large and key suppliers, and as their tentacles spread into many areas of government business, and government bodies, the greater the effects when the worst happens and those tentacles are withdrawn. Carillion showed us just how fallible we can be, and how the demise of one big supplier can have a domino effect on all the smaller suppliers that surround it.

So, had the Carillion contract been managed under a more developed supplier relationship management programme, or supplier lifecycle management programme, as part of a more holistic relationship and ongoing performance evaluation, one wonders whether there might have been less devastation. You probably could not have prevented the catastrophe, but there may well have been indications more early on that serious things were amiss, perhaps to do with hitting deadlines, quality of service, financial health, crisis responsiveness, and so on, which might have led to quicker intervention. Let’s face it, the whole thing was nothing less than a shock, not only to the public sector but to almost every UK business.

As Spend Matters said in a post-Carillion analysis: “One of the most shocking aspects of the Carillion process was just how quickly matters descended into the critical state,” even though the company’s financial accounts had been published and signed off by accounting experts just the year before and performance was deemed to be ‘meeting expectations’ the firm went on to announce profit warnings and eventual demise.

“So this shows very clearly the need to carry out some sort of continuous monitoring of suppliers’ financial situation and health. It is no good at all doing a snapshot when you first onboard the organisation, then hoping for the best, or even doing an annual check, perhaps around their annual results or report. The position can change very quickly. Monitoring must be ongoing to pick up changes in sentiment, payment profile perhaps, or other signs that matters may be getting to a worrying point,” it warned.

Of course the whole single-supplier question comes into play, and begs the many-times-debated, ‘should the government rely so heavily on big suppliers at all, or break up jobs and spread the risk?’ But that’s a discussion for another day, today, getting back to the webinar, we are talking about how a strategic, SRM programme can help not only mitigate some of the risk, but actually create value that goes beyond keeping a supplier on track.  We’re talking about innovation, about trust, about open and honest discussions, about developing long-term relationships – and keeping them!

So it’s important to think hard about managing suppliers and contracts well. That means not just focusing on each individual contract, but on the whole overarching scenario of how each contract plays into another. In the webinar, Steve Duckworth of the Cabinet Office explains how the government is managing its key suppliers more holistically now, building on the lessons it has learnt. He explains how a more collaborative approach is helping them to share information, have smarter conversations and become more innovative. He emphasises the value that SRM can create if you really dive into what that relationship is doing and how it is performing, understanding it absolutely and caring for it.

Alan Day of State of Flux talks about the methodologies you can use to support better SRM. He describes six steps you can follow which, if done well and in their entirety, can lead to a successful SRM programme.

If you would like to read the latest findings of the State of Flux global best practice SRM survey, you can download that here.
And you can listen to the webinar below.